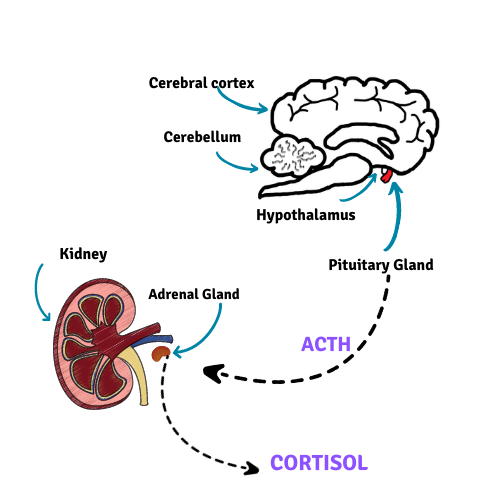 There are several parts to testing for Cushing’s disease. A normal blood test does not usually test for cortisol levels, or ACTH levels. But it can show elevated enzymes that are usually linked to the liver (usually called Alkaline Phosphatase). When liver enzymes in your pet are elevated, we often recommend an ultrasound to ensure the liver is in fact healthy. Ultrasound can also be used to measure your pet’s adrenal gland size. In Cushing’s disease, either one or both adrenal glands are enlarged. While this is helpful in diagnosing Cushing’s disease, it does not give us any way of measuring how successful the treatment is. We need blood tests to monitor cortisol levels in the body so that we know how much of the treatment to give.
The cortisol level in the body fluctuates in response to what we are doing throughout the day, so there is no way to know if a cortisol level at a single point in time is “normal”. Instead, we have tests that tell us how your pet’s cortisol levels respond to various stimuli. There are 2 tests commonly used, although we usually only require one.

In this test your pet needs to have 2 blood tests, an hour apart. After the first test, we give your pet a dose of adrenocorticotrophic hormone (ACTH). This is the hormone that tells your pet’s adrenal gland to produce cortisol. If you pet has Cushing’s disease, they will produce far more cortisol than they should in response to this.

In this test your pet has 3 blood tests – an initial one, then another one 4 hours later, and then 8 hours later. Your pet is given a small amount of dexamethasone after the initial test. Dexamethasone is a synthetic type of corticosteroid, like the cortisol produced in the adrenal glands. In a normal pet, dexamethasone will signal the pituitary gland to stop producing ACTH – as there is enough corticosteroid in the body already. This should suppress, or lower your pet’s cortisol levels over the next 2 tests. In a dog with Cushing’s disease, the cortisol level will either remain high, or drop down only temporarily (or only a little bit).